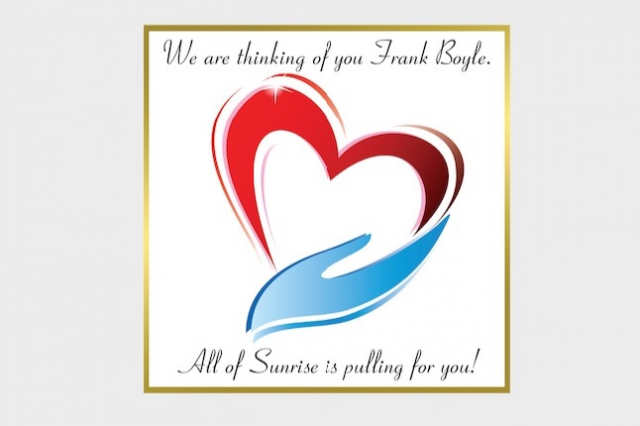 We need your help!  A couple of weeks ago a long time member of our Sunrise Little League family, Frank Boyle, suffered a severe stroke.  Frank had been a Manager and Coach at Sunrise since his son Dylan began T-ball in 2011 all the way through Dylan's jacket season last year in Majors.  Frank is one of the kindest men I have known as he always was willing to work extra hard with any player and showing up at every game and practice.  The players that played for him were lucky to have him in their dugout.   More important than baseball Frank embodies what little league is all about as he understood that it is more than baseball that makes Sunrise special.  It is just not little league where Frank imparts his knowledge as he has been a teacher within LAUSD at SOCES school.

Even during this Sunrise season Frank and Dylan would  come back to Sunrise to say hi and watch players they knew, still cheering them on.  Frank and Dylan have a  very special father/son relationship.  Now Frank and his family need our help.  His medical condition has currently left Frank unable to speak or use any of his lower body.  It will be a major fight and struggle for him to gain back these functions.  Frank wants to fight and get back to being the great dad and teacher he is.  So I am asking for us to come together as the great community that we are and raise as much funds for his medical fight that we can raise.  I set the bar low but I know we can pass this number.  Please give whatever you can.