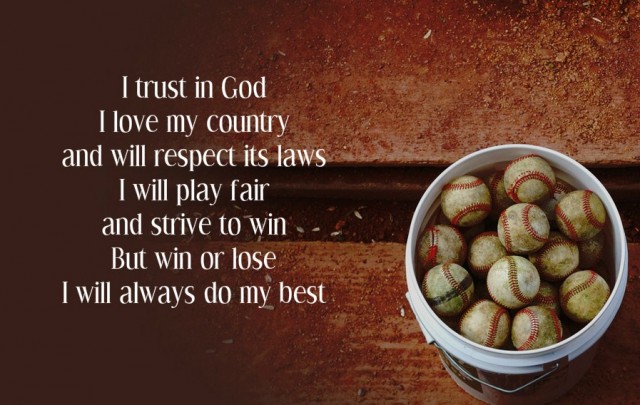 The Little League® Pledge was written by Peter J. McGovern, the late president of Little League Baseball, in 1954. It made its first appearance in the February 1955 Little Leaguer® magazine. Its text has remained unchanged in the half-century since then.

The Little League Pledge was drafted after Mr. McGovern became aware that local Little League programs were reciting the U.S. Pledge of Allegiance before games. Mr. McGovern wanted to give all leagues (not just those in the United States) a pledge reflecting some of the sentiments of the Pledge of Allegiance, minus the references to the U.S., while adding the elements of sportsmanship and the desire to excel.

In a response by letter to Mr. McGovern a few days later, President Eisenhower said: “Thank you for…sending me the inspiring and fine pledge that, I understand, will now be repeated at the start of the Little League Baseball games. I am always glad to hear the plans and activities of Little League.”

Today, local Little League programs sometimes choose to recite the Little League Pledge at the start of the season, and some recite it before every game. It is printed on the backs of the Little League rule books. Some local leagues also choose to play or sing the National Anthem of the country in which the game is played. Others may add a prayer to ceremonies.